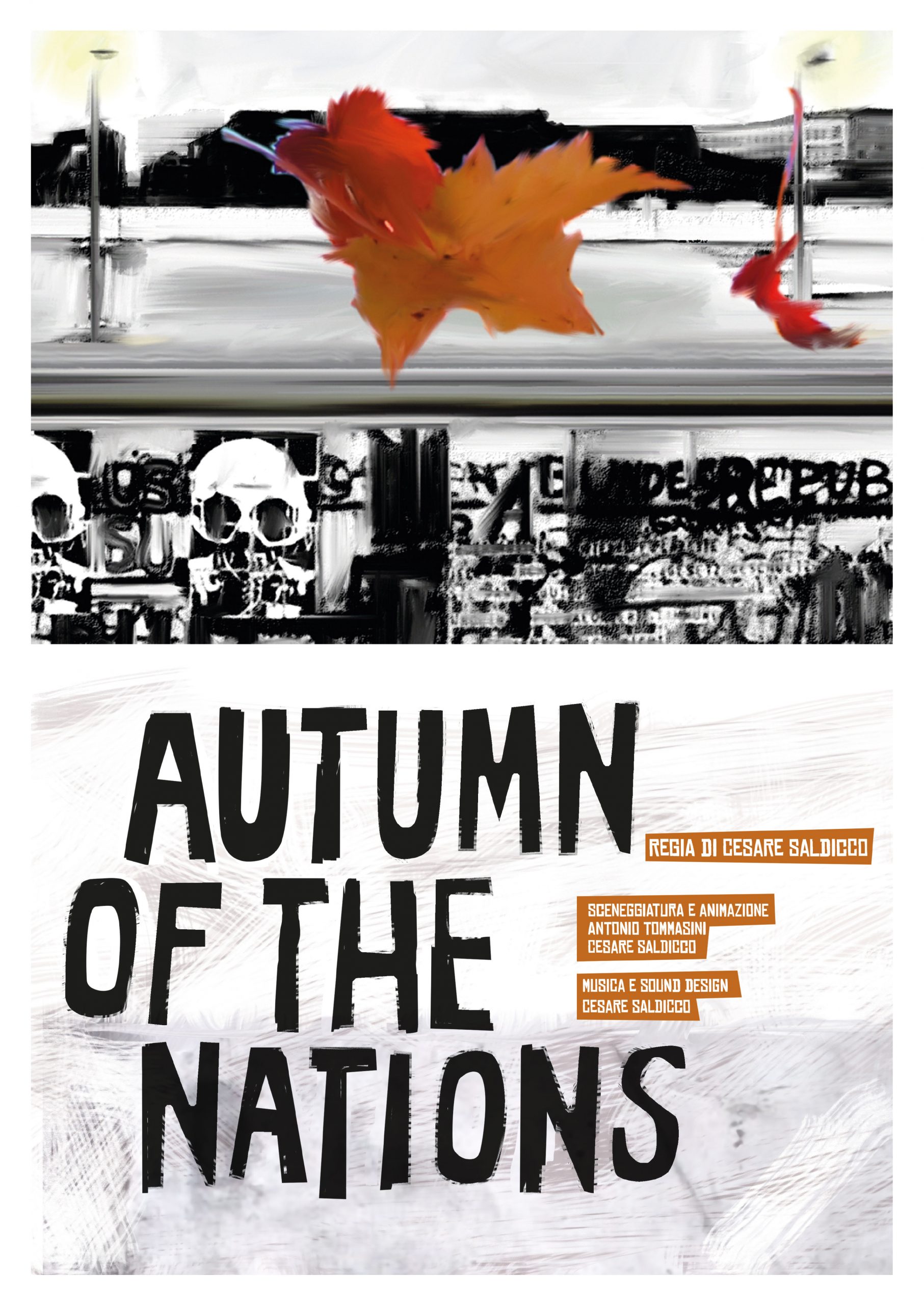 November, 9 1989: thousands of East Germans take to the streets forcing the gates in front of the powerless guards at the checkpoints; on the other side of the wall, the West Germans welcome their brothers with open arms. The images of the fall of the Berlin Wall, as well as a few months before those of the unknown insurgent with plastic bags that challenges a column of tanks in Tiananmen Square, have indelibly sculpted our era. Until then the world was divided between Reagan’s America and Gorbachev’s communist bloc. In the rhetoric of Hollywood films, the first one were the good guys, all the others the bad guys. Soon, the Iron Curtain and the Soviet Union would have disintegrated and the world would have greeted the end of the Cold War.

In the thirtieth anniversary of those events, a period known as the “Autumn of Nations”, a work of contemporary animation, which each frame is an accomplished drawing that lives within a creative magma: a painting in motion that acts as a medium for a visionary and rarefied narration. A short film to celebrate, as well as a pretext for a bitter reflection: after thirty years, geographical maps and mental borders have been redesigned in favor of a globalization that doesn’t take count of the history and continues to raise walls in the name of divisions and political aspirations.

Shadow Puppet Sketch is an experimental audiovisual study, where animation, acousmatic and sound design are on the same level.
The animation – made with the rotoscope technique on a 1.218 frames fragment – was drawn frame by frame, in negative, to dramatize the sequence through the use of black and white, and then composed, segmented and re-composed in an extremely rhythmic editing.
A sleeping woman, is reached by the shadow of a hand, the disturbing presence of the shadow reveals a growing fragility that lends itself to multiple readings: it could be the metaphor of a morbid story, or a son who is tormenting his own mother, or the representation of a certain female condition: the puppet-woman, as the personification of the object and subject, the machine and the body, a slave icon of a still strongly male culture, and the shadow, as an alter ego of man, an almost persecutory projection, which trains its power only with armless persons.

Halfway between imaginative dimension and sound, between documentary and time-lapse, frames and sounds that inhabit the pictures of “I camminatori” (The walkers) bring into resonance the words of Testa’s poems, framing each verse in a kind of instant sound.
Conceived as a musical score, the film-installation is characterized by the double dialectic between sound and image: from one hand, the audio text alternates readings to actual soundtracks acousmatic poem, the image, from the other hand the visual part is played on the contrast between static and plasticity; slow movements of the machine that linger on landscapes where there is an absence of man, alternate with sequences in time-lapse and characterized by a frenetic pace and tight.
A collage of stories and improvisations sequence where image and sound come together in a poietic and abstract dimension, while the rhythm, punctuated by the alternation of film shot and time-lapse, characterizes the formal symmetry.
One possible reading of an archetype as widespread as mythological: the journey, the journey undertaken by hikers, explorers, the dreamers, the emigrants, to all those that move like real islands wandering between water and land borders in the world ,
A trip, then, driven by the desire to explore the world that lies beyond the veil of everyday life behind and which are gathered and amplified anxieties, instincts and psychology that belongs to the man of every time and every place.

A Cellular Automata can be considered a film that is generated by itself, capable of representing and shaping a wide range of self-organized phenomena. It is a collection of cells which, on the basis of simple mathematical rules, can live, die or multiply. Still Life (literally and ironically “nature morte”) refers to the most famous of Cellular Automata: The Game of Life invented by mathematician John H. Conway. The piece suggests an image so far from the nature: the aim is not to have a slavishly sonification of the cells which drive the world of Life, rather than convey an image that pushes life to life itself. Recognize, through an exploration of the sound space, forms and movements that are in our body, our thoughts, our habitat, in order to resonate with the one’s self.

L3 starts from the encounter of two active composers in the field of electro acoustic music and live electronics with a video artist who operates in the field of live video performance.
The cut-up & grain project, of which the first chapter, Life, has been recently introduced (Live Performers Meeting 2008 – Rome), conceptually devotes itself to the cut-up technique, devised and experienced by the American writer, and spiritual father of the beat generation, William S. Burroughs.
The video and sound materials which make up the “libraries” used by performing artists almost exclusively come from the web. Fifteen key words chosen by artists as significant of the established narrative path are inserted in a search engine. From the enormous amount of results video and sound clips are selected which to compare or contrast, describe such a path constituting the “palette” of the three players. During the performance the artists elaborate the materials in real time, fragmenting them, transforming them and reconstructing a new sense, a sense “other” than the original one. The performers use various techniques, among which it is worth mentioning the “grainy” sound, obtained thanks to the original patches programmed in Max/MSP environment. Improvisation plays an important role in the performance, which every time turns out to be different from each other, even though it has the same title and uses the same libreries.